The Dog Training Club of Champaign-Urbana was organized almost fifty years ago by a group of dog obedience enthusiasts. The first organizational meeting was held in July 1976 with 21 members; dues were set at $10 per year. Through the efforts of those founding members, DTCCU became an AKC sanctioned club in January of 1978 and subsequently became a licensed AKC club on March 1, 1983. DTCCU held its first Obedience Trial in April 1984, first Tracking Test in December 1985 and first Agility Trial in October 1999.

Prior to the construction of our current facility, members conducted classes in a number of different venues, including a member’s warehouse, a vacant store, Spaulding Park and Lake of the Woods Pavilion. After years of moving from place to place, the club was able to purchase a building located at 2000 N Cunningham Ave in Urbana. Finally, in 2001, DTCCU was fortunate to acquire our present property through imaginative financing, members’ generosity, and sweat equity. Prior to the construction of our club building, DTCCU Obedience trials were held at Chanute Air Force Base, the St. Joseph Grade School, the Decatur Civic Center, and the David S Palmer Civic Center while Agility trials were held at the Kennekuk Cove County Park and the Champaign County Fairgrounds.

Register for on-site and online classes.

2 weeks ago
COVID-19 Tier 3 Resurgance Mitigations and DTCCU
The Governor has rolled out new restrictions to try to reduce the impact of the COVID-19 pandemic on individual's health and the health care system. 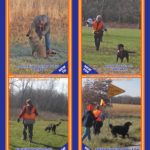